Definition of waste management
Waste management (or waste disposal) [is] the activities and actions required to manage waste from its inception to its final disposal.
JOE ORLOW   (240) 850-5386    courier@softwine.press

Human waste management
Access to a standard means of disposing of waste may not always be available. Yet, any laxness in the disposal of waste can doom a nomadic operation. Thus, the first daily task of a nomad is to act with alacrity to collect and dispose of waste.

Human waste management in America begins in rooms in buildings and vehicles variously referred to by terms like “bathroom”, or “restroom”. These rooms have a place in them where human waste is deposited.

From there, the human waste is disposed of in one of three ways:

1. Plumbing in conjuction with a municipal treatment plant or septic system
2. Composting
3. Dumping in landfill

Plumbing
In cities, water is mixed with the waste and the mixture is transported via pipes to a central processing area.

In more rural areas and in vehicles, water is mixed with the waste and the mixture is introduced into a septic system.

For a house, the septic system involves a septic tank followed by treatment in an underground or an overground processing area near the house known as a septic field or a sewage lagoon, respectively.

For a vehicle, the mixture is stored in a septic tank which is incorporated into the vehicle. The septic tank is periodically emptied at special facilities.

Composting
Another waste disposal system uses composting. A composting toilet typically mixes waste with some sort of absorbent material and is set up to allow the waste to begin decomposing. The composting toilet is periodically emptied into a humanure compost heap.

Landfill
Another option for human waste disposal involves packaging the waste. The package of waste is stored temporarily and later picked up and transported by a sanitation truck to a landfill. Typically, this option is used for the disposing of baby diapers.

The van system for solid waste
This latter option, disposing at a landfill, can be modified and adapted for adult use. This is a popular system used by road nomads, especially those living in vans or other vehicles that don’t have a septic tank or a composting toilet. This van method is suitable for disposal of solid waste.

For those interested in this method, I recommend videos on the subject on Bob Well’s Cheap RV Living YouTube video channel.

One simple implementation of the van system is a 5-gallon bucket lined with a plastic bag. The opening at the top of the bucket has a toilet seat attached. The expelled waste remains deposited in the bag; then the bag is closed and set aside. The bag with waste is later put into a container outside that is in turn emptied by municipal workers into a truck which transports the waste to a landfill.

The Hippo Sak, a sturdy plastic bag, is central to the hippo system. Boasting a 5-star rating and over 1,200 reviews on Amazon, you know these bags are good. When bought in bulk, the bags cost about $0.15 each.

Hippos are made from a thicker type of plastic than some other bags in their 13-gallon league and have reinforced bottom seams to avoid breakage at the critical points where plastic bags tend to tear. Each bag has two handles.

Here is how the hippo is used for nomadic human waste management.

1. The nomad uncovers their body in preparation to expel waste.

2. The nomad grabs the hippo handles and positions the open bag behind and below him, a handle on each side of the body.

3. The bag opening is positioned so that as solid waste exits the body it enters the bag.

4. The nomad bends their knees and proceeds to expel the waste into the bag. The body cleanup material, typically paper, is also deposited into the bag.

5. The bag is closed and set aside.

In essence, the hippo system is the 5-gallon bucket method without the bucket and toilet seat. It is recommended, however, that a 5-gallon bucket with a gamma seal be used to store bags containing waste that are awaiting further disposal.

The hippo is easily closed by tying the long handles into a half knot, which also allows it to be re-opened without fuss.

A recommended addition to the hippo process is to pre-fill and/or post-fill the hippo with sawdust, wood shavings, or coconut husk fiber. This assists in odor control and mitigates disaster on the off chance the bag ever tears. These items are all available on Amazon. Other worthwhile purchases to round out the hippo system include latex gloves, rubber reusable gloves, the larger Hippo Saks, a tarp for basic privacy, and masks.

For economy’s sake, a hippo bag with waste can be reopened and used again over the course of several hours, or even days in an emergency or when one is low on bags or just wants to be frugal. It is probably best in that case not to skip adding wood shavings or other absorbent material.

Also, because hippos are semi-translucent, it is recommended to double bag the waste when reusing a hippo, since it becomes more obvious what the contents are when the bag holds a week’s worth of waste.

The hippo system for liquid waste

Disposal of liquid waste involves using glass or plastic containers such as jars and bottles. Typically, the liquid is expelled into a jar. If it’s a small jar, the contents can be immediately transferred to a larger bottle.

Summary of the hippo system of disposing of human solid and liquid waste
Overall, the hippo system works. It has notable cons:
-The method can be tricky because it requires sequestering the solid and liquid waste.
-The method is labor intensive because it requires more than just flushing waste away.
-It is not sustainable because it uses plastic bags for the solid waste. However, there are now Hippo Saks that are are made sustainably for about $.05 more per bag.

Some more notes on the hippo system

Diversity
The actual position while defecating differs according to culture.

More natural
Scientific research indicates that squatting, as opposed to sitting, may be the more natural way to expel waste. According to one website, the ideal angle is 35 degrees; that is, the angle between the part of the back of the leg above and below the knee, with the knee as the vertex of the angle.

Best for a nomadic diet
The hippo system works well for nomads because the nomad diet is a high fiber diet incorporating sufficient quantities of olive oil and water. This means that the consistency of the waste can be soft and is expelled quickly. The entire process from preparing the Hippo bag to closing it can take under a minute.

Not suitable for all diets
The hippo method may not be suitable for some diets. Some diets tend to bind the waste tighter leading to harder, drier stool. This in turn can lead to a slower defecation process. Squatting, as required by the hippo system, may become tiring.

Privacy techniques
Privacy is required for the hippo system no less than with any other human waste management method. One can imagine utilizing the hippo system in a car. The windows can be blocked. Or a sheet or blanket can be draped over the person. The person can place their feet on the back seat while facing towards the back of the car.

And for those ready to shell out the nomadic big bucks, there is this, a portable popup privacy portal. 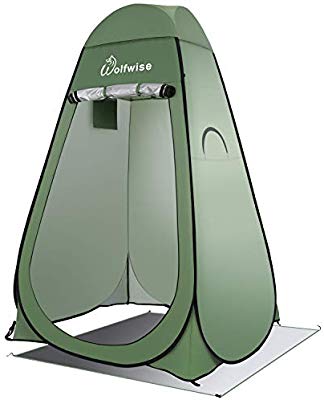 Sorry. Not for me. Nosirree.
As with any new endeavor, the hippo experience may initially seem strange, unnatural and even uncomfortable. For a child, so does the potty at first. With practice, these feelings are subject to change.

About that mason jar you were going to recycle….
Mason jars of various sizes can be used for liquid waste. A funnel and a gallon bottle, such as an empty apple cider bottle, can be used as a secondary disposal bottle.

MEN ONLY
A method for men for liquid disposal at night is a condom catheter system. This method obviates the need to get up when lying down in a cold environment. This method can get expensive. It is useful in other situations beyond cold nights, too, such as when travelling and stopping and/or finding a private location is problematic.

Why can’t the Hippo bag be used to contain liquid waste also?
It can be. One can expel both solid and liquid waste into a Hippo bag.

If one must use a Hippo bag in this manner, it is recommended to pre-fill and post-fill the bag with a bit of wood chips, sawdust, and/or coconut husk fiber. It is also recommended to double bag. That is, before or after hippoing, put the Hippo bag inside a second outer bag.

The hippo system has a decided advantage over standard human waste disposal in one regard, and that is in the area of hippo system paper.

“Toilet paper” is flimsy because of the need to make the paper flushable. Anything more substantial will almost inevitably lead to clogging up toilet pipes and/or sewer pipes, and will not degrade properly in septic systems.

The hippo system has none of these drawbacks since the paper is deposited into the hippo bag and ultimately disposed of at the city dump.

Paper dinner napkins are suitable for the hippo system. One of the bargain brands is out of stock.

An alternative is this bamboo napkin or the more economical linen-type paper napkins such as this one.

Hippo system paper has the advantages of size, strength, and absorbency.

Hippo system paper can be used dry, yet because it is thick and substantial can be enhanced by adding liquid Castile soap with the eyedropper method.